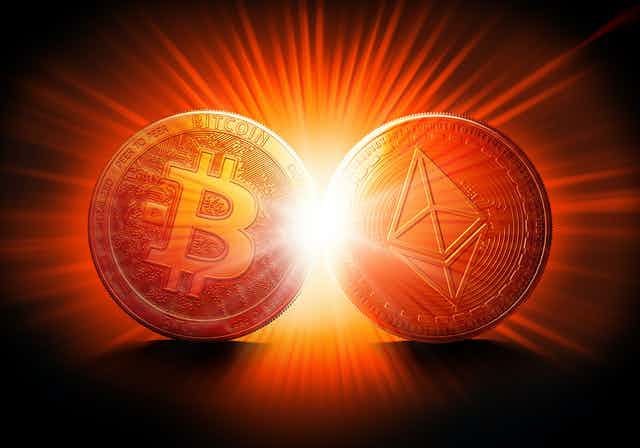 Times could be changing, Investors could be distributing.

Ethereum’s price went above $4,400 Wednesday, continuing its climb after a big drop over the weekend.

It dropped below $3,700 Saturday morning, extending a sudden and decisive drop that started Friday afternoon. The decrease followed a relatively strong week for Ethereum, which nearly hit $4,800 — close to its current all-time high — last Wednesday.

The weekend drop below $4,000 is the lowest Ethereum’s price had been since early October. Ethereum set a new all-time high on Nov. 10 when its price went over $4,850.

Bitcoin and Ethereum had both been at or near their all-time highs before this past weekend, with Bitcoin setting a new all-time high over $68,000 in November as well. Bitcoin also saw a big drop Saturday morning, falling below $50,000. The falling prices come after new comments last week from SEC Chairman Gary Gensler about cryptocurrency regulation, concern over the new omicron variant of the coronavirus, and the $1.2 trillion infrastructure bill President Joe Biden signed last month that contains several crypto tax reporting provisions.

The future of cryptocurrency is sure to include plenty more volatility in the price of Bitcoin and Ethereum, and experts’ advice for investors remains the same.

What Should Ethereum Investors Do?

As with any long-term investment, experts advise to ignore the ups and downs. The latest high price doesn’t mean Ethereum’s volatility has gone away.
“The real question is, owning these coins, are they going to continue to experience compound, exponential growth? Nothing in the fundamentals of cryptocurrency tells me that answer is yes,” says Jeremy Schnieder, the investing expert behind Personal Finance Club.
Because there’s no guarantee that any crypto’s value will increase, experts advise to never invest more than 5% of your portfolio in cryptocurrency. Never invest at the risk of not meeting other financial goals like paying off high-interest debt or saving for retirement.
If you’ve met all of those benchmarks, the best thing you can do is ignore the hype around new record highs or lows. Like with traditional, long-term investing, the best thing you can do is “set it and forget it,” Humphrey Yang, the personal finance expert behind Humphrey Talks, previously told NextAdvisor.
Financial experts say it’s a good idea to start with the two most well-known cryptocurrencies on the market right now: Bitcoin and Ethereum. Both Bitcoin and Ethereum have recently set new all-time highs, though don’t take that as meaning there isn’t plenty more volatility in the future.
Bitcoin and Ethereum are also the two largest cryptocurrencies by market cap and exchange volume, but they’re very different when you look past the popularity they share. While either can be a good choice for crypto beginners, determining which is right for you may require a closer look at your own goals.
An upcoming Ethereum network update could bring more attention to Ethereum in coming months, says Vrishin Subramaniam, founder and financial planner at CapitalWe, which is why he would currently go for Ethereum. But he also recognizes the potential of both cryptocurrencies. “We are still fairly early in the adoption curve and I think both Bitcoin and Ethereum will continue to hold value. I view Bitcoin as the more mainstream of the two, while Ethereum is the more utilitarian of the two,” says Subramaniam.

Currently, Ethereum operates on a proof of work (PoW) model, where miners must compete to solve complex puzzles in order to validate transactions. This model gets a lot of criticism due to its environmental impact, as it requires an extreme amount of computer power.

In 2022, Ethereum plans to shift to a proof of stake (PoS) model, where users can only validate transactions according to how many coins they hold.

PoS will no longer require the energy of PoW, reducing the environmental impact of Ethereum by 99%, Tim Beiko, the coordinator for Ethereum’s protocol developers, tells CNBC Make It. Although the full migration to PoS won’t happen in the short-term, Altair is an important “step closer” to it, Beiko says.

Why the Altair upgrade matters

Right now, Ethereum has both a PoS and a PoW chain running in parallel with each other, Beiko says. Both chains have validators, but only the PoW chain processes users’ transactions. But in 2022, the Ethereum blockchain will merge fully with the Beacon Chain, shifting it from a PoW model to a PoS model entirely.

Altair is important because it’s a test of sorts to make sure the Beacon Chain “works properly,” Beiko says. The upgrade shows a full transition to PoS is possible, he says.

“It shows we are able to upgrade the PoS mechanism, and that’s a pre-condition to the migration next year,” he explains. “It means there’s a slightly higher chance that things will go well for the [Eth2] transition next year.”

In addition to upgrading the Beacon Chain, Altair also implemented two key changes to the Ethereum network: It added support for “light clients,” or lower-powered devices like mobile phones that can verify transactions, which furthers the decentralization of Ethereum, and it increased penalties for validators who are inactive or frequently offline, among other things.

Once implemented, Ethereum 2.0 will hugely change the network’s infrastructure. It aims to make Ethereum more scalable, secure and sustainable.

PoS supporters also say it will reduce the environmental impact of Ethereum. That will happen in part because Ethereum 2.0 will ultimately make mining on the blockchain obsolete, Beiko says. PoS only allows users staking, or holding, Ethereum to validate transactions, rather than the energy-intensive mining rigs used now.

But if the transition goes smoothly next year, that will also mean that Ethereum mining will no longer generate revenue. Although it’s impossible to predict the future price of any asset, some speculate it may impact the price of ether.

Nonetheless, there’s a long way to go before this transition, Beiko says. The Altair upgrade simply supports that a transition to PoS is likely. Until then, the PoW model remains.

Ethereum has several major problems, however. The first is that gas fees have become very expensive in the last couple of years because the network has become so popular and is therefore very congested.

Validators prioritise users who are willing to pay the highest fees for their transactions. For example, the average transaction at the time of writing on crypto exchange Uniswap costs around US$44 in gas fees.

Bitcoin has comparable issues with congestion, which its developers are trying to solve by building applications like Lightning on top which boast faster transaction speeds.

The second problem for ethereum is that, as it has become more popular, the amount of computational power used by validators has rocketed. It’s the same problem that has brought a lot of negative publicity to bitcoin, because it uses a lot of electricity.

Bitcoin is currently using as much power as the whole of the Philippines, although its supporters argue that much of this is power that would otherwise be wasted – for example, oil rigs burning off natural gas because it’s not profitable to sell it. Proponents also point out that the network is shifting towards using much more renewable power over time.

At any rate, the eventual creation of an ethereum 2.0 will solve these problems by moving the platform’s system of validation from “proof of work” to “proof of stake”. Without getting into too many details, proof of work is a protocol in which validators all attempt to solve complex equations to prove that each proposed transaction is valid. With proof of stake, there’s no need for all validators to do this power-hungry work, because the system chooses one at random to confirm each transaction.

Many in the bitcoin community are against proof of stake because it gives the most power to the biggest validators, potentially allowing them to corrupt the system of validation if they can get control of more than half of the network. Ethereum supporters counter that proof of stake has checks and balances built in that would prevent this from happening.

Either way, ethereum 2.0 promises to reduce the platform’s power consumption by 99.9%, making it far more sustainable. It should also solve the problem with gas fees by raising the platform’s processing ability from 30 transactions a second to potentially 100,000, as well as making possible more sophisticated smart contracts than before.

The transition to ethereum 2.0 has been a slow one, riddled with technical issues that have dragged on for over two years. For the past few months, the new proof-of-stake blockchain has been running in a test format in parallel with the existing system, allowing the developers to prepare it for a merger in 2022.

The forthcoming upgrade is essentially a warm up for this merger. Known as Altair, it introduces numerous technical changes that are designed to keep validators honest and make the system more decentralised. Assuming this goes ahead as planned, all eyes will be on the merger, and then later another change known as “sharding” which will greatly increase the system’s processing capability.

Certainly the price of ether has been strong ahead of the Altair upgrade. The recent surge in bitcoin to all-time highs has been helping to lift the entire crypto market. But some of the price movement in ether probably reflects people betting that the upgrade will succeed, while the rest is from speculators switching from bitcoin, and new money moving into the space.

n the run-up to the merger of ethereum’s two blockchains, it will be interesting to see how all this affects ether’s price in relation to the so-called “eth killers”. These are rival platforms like cardano and solana that have been very popular in recent months partly due to ethereum’s problems with fees.

But ultimately the question is what it will mean for bitcoin. Bitcoiners will continue to argue that their protocol is more decentralised than proof of stake, and they have the advantage of being the crypto brand that investors are most comfortable risking their money with.

The question is whether these advantages are outweighed by ethereum 2.0’s greener credentials and the fact that it can handle more transactions. Bitcoin is currently worth about double ether, but talk comes and goes about a “flippening” where ether overtakes it. Could it happen in 2022? With bitcoin’s hegemony at stake, it will be fascinating to find out.