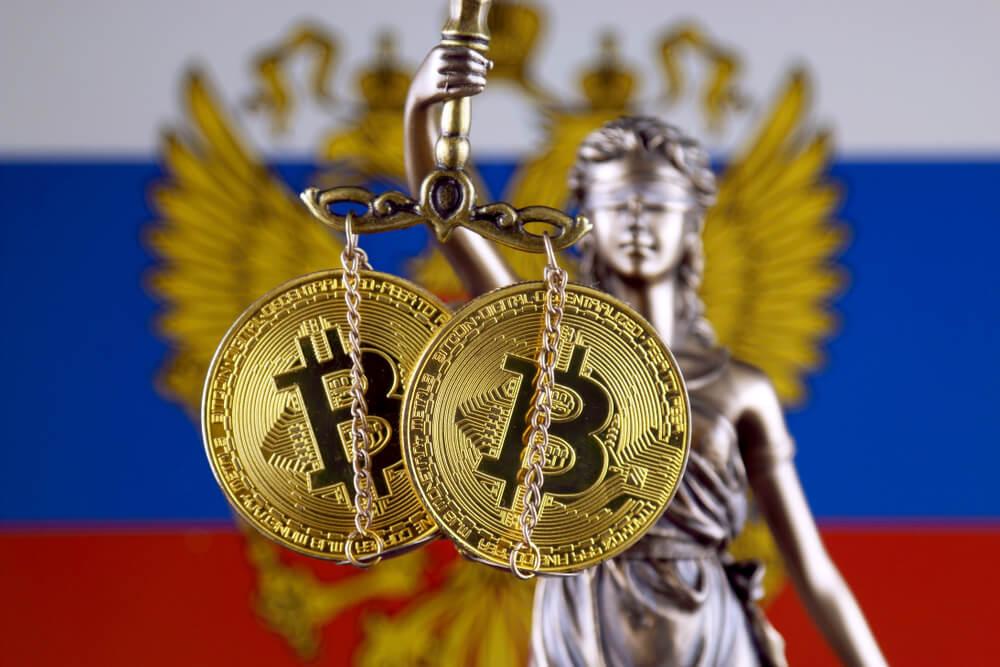 Cryptocurrencies may help Russia and its billionaires blunt the impact of western sanctions.

U.S. President Joe Biden said Thursday he has authorized “strong sanctions” in response to Russia’s invasion of Ukraine. These aim to limit its ability to do business in dollars and other major international currencies, and include penalties on five Russian banks that represent an estimated $1 trillion in assets. A broad swath of Russian elites and their family members will also be targeted. That’s all in addition to penalties that were imposed earlier this week.

But those sanctions might carry less weight in a country that is taking steps to legalize cryptocurrencies and where the digital assets are already widely owned. Typically, nations employ physical workarounds to avoid sanctions, such as Venezuela and North Korea’s use of ship-to-ship transfers of fuel, but digital assets like crypto and decentralized exchanges could become the most effective way to circumvent penalties.

“Neither dictators nor human rights activists will encounter any censor on the Bitcoin network,” said Matthew Sigel, head of digital assets research at investment manager VanEck.

Sanctions imposed on companies and individuals by the U.S. and its allies could essentially close them out of the West. Billionaires, some of whom have already been targeted directly, potentially stand to circumvent those penalties if they choose to use crypto, which uses blockchain technology to keep transactions anonymous. The digital currencies might help them buy goods and services and invest in assets outside of Russia — all while avoiding banks or institutions that adhere to sanctions and could trace their transactions.

“If two people or organizations want to do business with each other and are not able to do so through the banks, they can do it with Bitcoin,” said Mati Greenspan, founder and chief executive officer of financial advisory firm Quantum Economics. “If a wealthy individual is concerned that their accounts may be frozen due to sanctions, they can simply hold their wealth in Bitcoin in order to be protected from such actions.”

Unlike fiat currencies, which need to move through third-party institutions that have the ability to track, freeze or block them, cryptocurrencies can potentially be sent from one person directly to another regardless of any government sanctions or other restrictions.

Crypto holders can also set up a web of wallets with different addresses across several exchanges, making it extremely difficult to track any activity and even harder to tie transactions back to a particular individual. Additionally, they can choose cryptocurrency exchanges that are not based in jurisdictions that are imposing sanctions and therefore don’t necessarily have to adhere to regulations.

But any assets held in crypto wouldn’t be easily converted into fiat currencies, experts say, making any money that trades hands less disposable. And in order to circumvent banks or even centralized exchanges that adhere to sanctions, individuals would have to convince any services they are doing business with to accept digital payment, which could be difficult.

The wealthy Russians who will be targeted with sanctions are “people that personally gained from the Kremlin’s policies and they should share in the pain,” Biden said on Thursday. “We will keep up this drumbeat of those designations against corrupt billionaires in the days ahead.”

None of the billionaires sanctioned prior to Thursday has so far publicly revealed whether they’re crypto holders.

To be sure, there are still ways for governments to impose regulations on cryptocurrency holdings that exist on centralized exchanges, said David Tawil, president of crypto investment firm ProChain Capital. He referred to the recent crackdown by the Canadian government on crypto accounts owned by truckers who were receiving funds to support their blockades of U.S.-Canada border crossings and a weeks-long protest in the capital city of Ottawa.

Assuming that money laundering is easier via cryptocurrencies is a misconception, said Brett Harrison, president of crypto exchange FTX US. He explains that exchanges have access to certain technology that allows for tracking and screening of wallets that come from sanctioned countries. It would also be difficult for individuals to convert cryptocurrencies to fiat currencies through centralized exchanges without getting caught — essentially making it harder for them to spend.

“The thing that can be prevented is the funds forever leaving an exchange where proper sanctions are properly upheld,” said Harrison. “As soon as it moves anywhere, everyone can see it because it’s on a public blockchain, but even if they could move it, no exchange will let them convert this to a currency and the second they do they are caught.”

FTX frequently gets contacted by law enforcement agencies across several states and countries with subpoenas to seize funds from certain addresses, he said. The extent to which cryptocurrency can be traceable is visible from the recent arrest of two individuals related to the 2016 Bitfinex hack. The U.S. government was able to track the activity of certain wallets and as a result freeze the accounts as soon as they were converted into fiat currencies.

The legal status of cryptocurrencies in Russia is in flux, with the government pushing to permit them in order to attract foreign investment and bring domestic trading out of the shadows, while the central bank says they bear the hallmarks of a pyramid scheme and should be banned. Putin last month ordered them to reach a quick compromise, but top government officials have so far failed to agree on how to regulate crypto.

But millions of Russians are already immersed in this digital world — they own more than 2 trillion rubles ($22.9 billion) worth of cryptocurrencies, according to a recent government paper.

More than 17 million Russians, or about 12% of the total population, are cryptocurrency owners, according to data from Singapore-based payment gateway TripleA. And with more sanctions pending, it could be in Russia’s interest to let rich individuals deal in crypto regardless of its legal status.

“To have conflicting thoughts out there is kind of okay and they’ll get to the issue when they can get to the issue,” said ProChain’s Tawil, explaining that even the U.S. has struggled to define the legal framework and regulations surrounding cryptocurrencies. “I would think that the majority of crypto activity in Russia is frankly in rhythm with the government.”

Other countries around the former Soviet Union are also paying more attention to crypto. Last week, the Ukrainian parliament backed a bill to legalize cryptocurrencies, while Kazakhstan is pushing to better regulate and tax its booming crypto-mining industry.

U.S. equities initially tumbled Thursday after Russia invaded Ukraine, with the S&P 500 Index losing as much as 2.6% and the tech-heavy Nasdaq 100 extending its drop to 20% from its last record high in November. Stocks have since pared their losses, with the Nasdaq 100 turning positive. Bitcoin slumped as much as 8.5% to $34,337, bringing its decline to nearly 50% since its all-time high set in November.

However, in October 2014, when asked whether bitcoin or another cryptocurrency could be used as an alternative to the dollar in trading oil — a key export for Russia — Putin said it’s “too early to talk about the trade of energy resources in crypto.”

“I believe that it has value,” he told CNBC’s Hadley Gamble at the Russian Energy Week event in Moscow Wednesday. “But I don’t believe it can be used in the oil trade.”

“Cryptocurrency is not supported by anything as of yet,” Putin said. “It may exist as a means of payment, but I think it’s too early to say about the oil trade in cryptocurrency.”

The Russian leader also flagged cryptocurrencies’ massive consumption of energy as a potential barrier to their use. Bitcoin requires lots of computing power to process transactions and mint new tokens.

However, Putin didn’t mince words on Russia’s attempt to move away from reliance on the dollar for trade.

“I believe the U.S. makes a huge mistake in using the dollar as a sanction instrument,” he said. “We are forced. We have no other choice but to move to transactions in other currencies.”

“In this regard, we can say the United States bites the hand that feeds it,” Putin added. “This dollar is a competitive advantage. It is a universal reserve currency, and the United States today uses it to pursue political goals, and they harm their strategic and economic interests as a result.”